45km of beach, single track and forest road racing on mountain bikes – and all in brilliant sunshine on the Welsh coast. How could I say no? 🙂 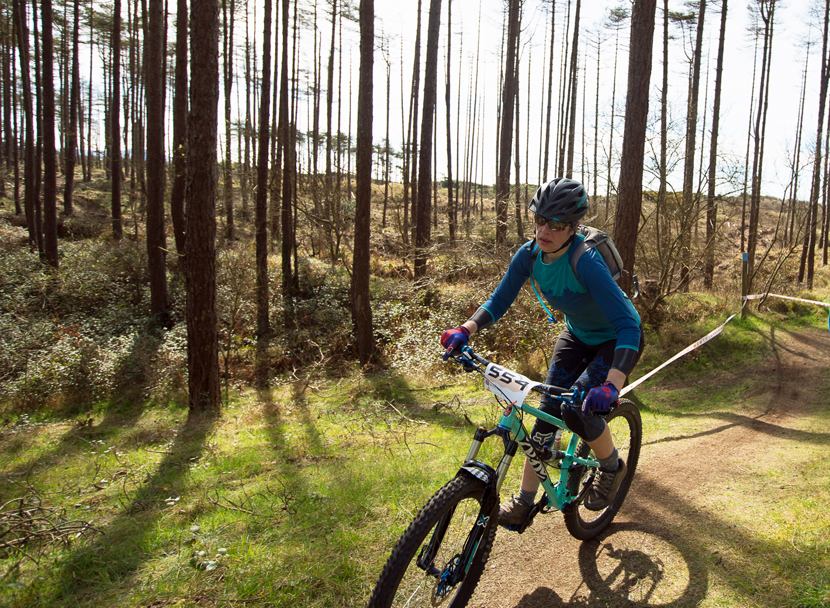 Battle on the Beach at Pembrey Country Park in Wales is mountain bike race like no other I have ridden before. For a start its a relatively flat course, peppered with some seriously steep, short, sharp climbs to clamber up. And while I’m used to mud and roots beneath the tyres, it is a novelty to ride through deep sand. Into a headwind. Let’s just say, when the 45 km is up, you know you’ve been for a ride – albeit one that was fantastic fun.

The start of the race is on the beach (photo: Anthony Pease)

There is a mass start and three laps – each lap consists of 5km beach, 5km forest road and 5km single track. After the initial sprint down the beach (wind behind us) we then turned into the dunes and rode the tracks and trails back to the start – straight into the headwind.  The single track isn’t the most technically demanding but was fast and flowing, and it was made all the more ‘exciting’ by the leading riders who lapped many of us before we’d done our first circuit. There wasn’t a lot of room to squeeze past – not that any of them were deterred from trying.

Although it was a race, there was a fantastic, friendly atmosphere particularly amongst us ‘also-rans’ who made up most of the 800 riders in the event. It was also the most beautiful day – full sunshine from start to finish.

When it comes to bike choice, Battle on the Beach kind of resembles a village dog show, but with mountain bikes: riders turn up with everything from super light gravel bikes to fat bikes and tandem mountain bikes, and ride side by side. I rode my Cotic Flare 650b trail bike and was really glad of its grip, full suspension and relatively slack geometry particularly while negotiating descents through deep sand, or on the bumpier sections of forest track where there were riders to overtake or coming up from behind.  If you were riding for the win, then a hard tail 29er was the order of the day – along with Olympic levels of fitness: 45km is a long way to ride on full power.

Here’s a film to show you more of this amazing event. Be sure to register for 2018!